Or, how I almost missed my lifer Yellow-billed Loon.

Let me start from the beginning. For those who don't know, I'm working in Western AZ right now, chasing Yellow-billed Cuckoos around and birding whenever I get the chance. A Yellow-billed Loon had been seen on and off this winter not far from where I live, and was refound shortly after I arrived here.

Apparently well known for frustrating optimistic birders who traveled hours to search for it, I was none the less determined to see it. A few failed attempts and triple digit highs the last few weeks, however, have tempered my enthusiasm to the I'll-just-scan-the-river-as-I-drive-by level.

And even that was fading fast. Don't get me wrong, I still wanted to see it, but it's hard to get excited about standing on the shore of the Colorado River not seeing anything at all bird related, going over scenarios in my head in which I try to convince a highway patrolman that I'm a birder and not some creep ogling girls. Really officer, there's a rare bird down there. Yea, it's probably underneath that boat right now. Yes, the one with all those girls sunbathing..

Which takes me to yesterday, coming back from Lake Havasu City, in which I used my two days off to do absolutely no birding whatsoever. I didn't even bring my binoculars with me. Everyone needs a little bit of a break now and then (actually, that's not true. Even sans binoculars, I still added California Gull to my county list..)

And what should see as I drive by the river, but a man with binos and a camera staring at the river! As I yell at my friend to pull over, I see it. Sitting in the river. Identifiable even without my binos. My lifer Yellow-billed Loon. And somehow, in the 5 seconds it took us to pull over, the man looking at the bird had vanished.

Leaving me staring at quite possibly the only Yellow-billed Loon I will ever see. Without any binoculars. Well, it's clearly a Yellow-billed Loon, I can see the massive upturned yellow bill from where I sit on the bank, the bird casually bobbing up and down in the river not 50 feet away. Probably better looks than some people have got even with there binos.

And then, here comes the birder who first was watching the loon, with a scope! My good luck never ceases! A few quick looks, some pictures are snapped (but not by me, my camera is still broken) and off he goes, hoping for a Yellow-billed Cuckoo that I gave him directions to find, as repayment for the temporary loan of his binos. All is well.


And that's that. Back to chasing Cuckoos in the morning and napping the rest of the day away.
Posted by David at 2:07 PM 1 comment:

Currently in Arizona, I've decided it's time to update my blog about my last field job, studying birds in Hawaii. The temperature currently hovering somewhere over 100 degrees, reminiscing about Hawaii birds seems way better than doing anything outside at the moment.

So here goes. First up is the ever present and absurdly 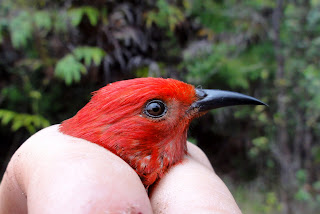 common Apapane. Undoubtedly the most common native songbird, there was rarely, if ever, a time when several of these guys weren't cavorting around in the canopy overhead. Sipping nectar from the also-absurdly-abundant Ohia Lehua flowers is their second favorite past time, right behind being unnecessarily sneaky about the location of their nests. 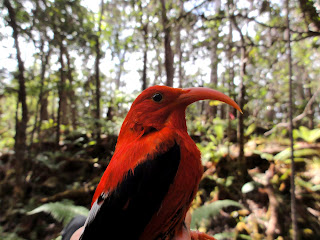 Also locally abundant, but not absurdly so, are one of my favorite birds, the I'iwi. Pronounced Ee-ee-vee (as in beet), because while the Hawaiian language only had 13 letters, they make those 13 letters as confusing as possible. I is pronounced as e, w is pronounced as a v, and 4 vowels in a row are not uncommon. Anyways, there is some debate among leading scientist (by that I mean me vs the rest of my field crew) as to what color these birds really are. The answer, of course, is orange. I mean look at that birds. It's more orange than an orange. You can practically smell it. Well, don't do that, they apparently smell like old canvas. Favorite past times include handing upside down from Lehua flowers with their ridiculously oversized bill designed to reach the nectar of flowers now extinct, squawking raucously and declining steadily. Also, bullying smaller songbirds and refusing to cooperate in our nest searching efforts. 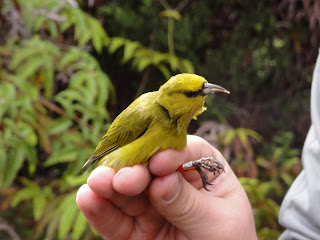 Next up is the spunky Amakihi. Seen at left with some new jewelry, these warbler sized birds specialize in fooling optimistic birders into thinking they are indeed the much rarer critically endangered Hawaiian Creeper. They are also one of the only birds to develop a degree of resistance to avain malaria, along with the Apapane allowing them to recolonize some of the lowland habitats that still retain some native forest, though it's vanishing fast. Among the most curious Hawaiian bird, I'd often find them watching me watching them. 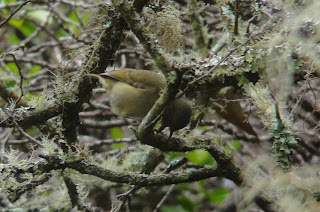 By far the most coolest extant Hawaiian bird is the absurdly named Akiapola'au. With a beak like a swiss army knife, these birds use their heavy bottom mandible to chisel for grubs in Koa trees, then yank the grub out with their long, curved upper mandible, as demonstrated by the female to the left. Adapted to fill the woodpecker niche, this critically endangered honeycreeper was hit hard by invasive rats, avian malaria and the loss of the old growth Koa forests upon which they rely for food. A captive breeding program, combined large tracts of native forests set aside for their protection, provides hope that they won't go the way of so many other Hawaiian species. They join the 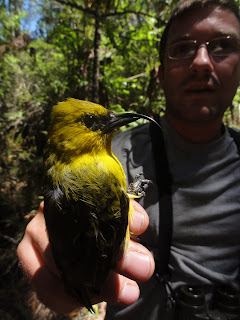 bright red tiny Akepa, the inconspicuous Hawaiian Creeper and the grosbeak like Palila on the list of critically endangered songbirds of the Big Island, all of which are in serious trouble but through the tireless efforts of scientists, are still holding on in the upland rainforests of one of the most unique ecosystems on earth.

Thats all for now, stay tuned for more updates as the temperatures in Arizona continue to preclude anything but sitting in air conditioned comfort.
Posted by David at 5:59 PM No comments:

David
Parker, Arizona, United States
Zugunruhe- a German compound consisting of Zug (move, migration) and Unruhe (anxiety, restlessness). Like the birds I seek I am a wanderer, casting about the continent in search of scarce resources (in my case, a job), never content to stay in one place too long, sometimes returning to old haunts but always moving on when the season changes. Also, I have a tendency towards superfluous commas and run-on sentences.